IAM District Lodge 19 (DL 19) this week held its eighth Quadrennial Convention in Boston, MA. Delegates were brought together from across the country to discuss an array of topics, vote on By-Law amendments, and to also vote on Executive Board members for each of their regions.
The successful convention had a diverse list of speakers, including Transportation General Vice President (GVP) Sito Pantoja, IAM/TCU National President Robert Scardelletti, Director of the Winpisinger Educational Center Chris Wagoner and Director of Guide Dogs of America Russ Gittlen.
A featured highlight of the convention was the honoring of member, Mark Thompson, for his heroic actions in helping a fellow coworker during a horrific on-the-job accident.
“Our district has made great strides since our last convention, and that is a tribute to every one of our members,” said Acting President Directing General Chairman Mike Perry. “We will continue to improve our district through training, communication and transparency.”
“I could not be more proud of the Executive Board and members of DL 19,” said GVP Pantoja. “Railroaders were the founders of our union and as tough as they come. Through their hard work and solidarity, they were able to overcome some hard times. I can’t wait to see what they accomplish over the next four years.”
DL 19 has 77 local lodges, representing over 16,000 active Machinists and approximately 6,000 retired members across the country. To learn more about DL 19, visit their website at:https://www.districtlodge19.com 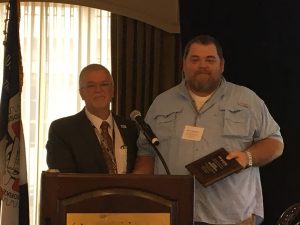 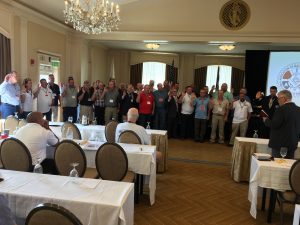