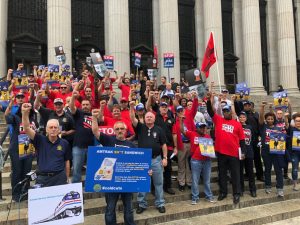 Workers and leaders from the Amtrak Service Workers Council (ASWC) rallied across from New York’s Penn Station in support of continuing Amtrak’s on-board food service and the 1,700 service staff.

Anderson already eliminated full dining-car service on two lines earlier this year and is looking to eliminate the popular customer amenity on routes across the country.

Approximately 1,700 working men and women could lose their jobs. 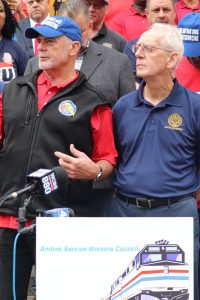 “We are going to fight him tooth and nail,” said Transport Workers Union of America President John Samuelsen. “We will have an ugly fight to meet the same ugliness he is bringing to Amtrak passengers.”

At a rally across from New York’s Penn Station, union leaders and riders stated that it appears Anderson is purposely putting the railroad into a death spiral. Eliminating dining car service means riders who pay hundreds of dollars – and higher – for tickets get served cold boxed lunches.

“I’ve worked under a number of CEOs, and until Anderson arrived on the scene, I’ve never saw anyone so hell-bent on destroying the system,” said Amy Griffin, a veteran food service worker and president of TWU Local 1460. “It’s not right for workers and not right for passengers. If he thinks we are going to let him get away with that – he’s got another thing coming.”

Amtrak ended full dining-car service on the Capital and Lake Shore Limited lines in June. Some workers were offered lower paying positions or jobs requiring them to relocate their families.

“Anderson should focus on expanding service, not cutting,” said Jones. “Nobody wants to eat a cold, boxed lunch. He is ruining the unique experience that comes with riding a long-distance train. What Anderson is doing is totally ludicrous. Expand Amtrak lines and service – if you build it, we will come.”

The affected Amtrak workers are represented by three unions, depending on the region: the Transport Workers Union (TWU), UNITE HERE and the Transportation Communications Union (TCU/IAM).

Complete comments from the press conference and rally:

“President Anderson plans on outsourcing 1,700 Amtrak jobs from my brothers and sisters. First, he eliminated full dining-car service from the Capitol and Lake Shore Limited lines and now he is proposing this. As he slices and dices Amtrak, he is not only ruining quality of service for passengers, he is turning middle class jobs into junk. Anderson thinks he can run Amtrak like an airline, nickeling and diming customers. This is a national railway and we won’t sit idly by while this robber baron CEO takes away our jobs and diminishes service.”

“This is part of an ugly national trend: disinvestment in our transit systems. He is treating the Amtrak system like a fast-food restaurant. It’s not a fast-food restaurant; it’s our national railway system. We are going to fight him tooth and nail. We will have an ugly fight to meet the same ugliness he is bringing to Amtrak passengers.”

“Look at this display of solidarity. This is what you will get when you try to outsource. We will not stand around and let Amtrak take these jobs away from us. This is not the way we travel. This is not the Jimmy John express with panoramic views. These brothers and sisters on the railroad work very hard to keep it going. We will fight until the end. United we stand.” 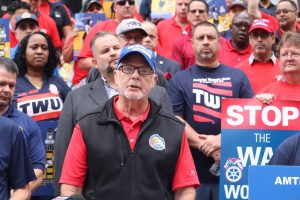 TCU Nat. Vice President Jack Dinsdale speaking about the importance of these jobs and the high quality service they provide.

“This attack on workers and long-distance trains is not about funding a national passenger railroad system, it’s about cutting employees, cutting long distance trains and putting people back in their cars. Amtrak is a customer service company, and that company is the employees. The employees who offer passenger service, passenger satisfaction and hot cooked meals. It’s time to recognize the hard workers at Amtrak for what they are and support them.”

“I’ve dedicated my entire working life providing high-quality service to our passengers. During my time at Amtrak, I’ve worked under several CEOs, and until Anderson arrived on the scene, I never saw any one so hell-bent on destroying the system. When he cut dining-car service, employees were forced to either relocate from their homes, start careers all over again in another position, or stop working for Amtrak altogether. Passengers are getting the shaft, too – paying hundreds and hundreds of dollars for cold food served in a cardboard box. It’s not right for workers and not right for passengers. If he thinks we are going to let him get away with that – he’s got another thing coming. Thank you for supporting our national rail service and the workers who make it ride.”

“I work as a Lead Service Agent, started out as a cleaner and worked my way up to dining car. I love it. I love what I do. This isn’t something I do occasionally, I do it every single day – and Amtrak has been good to me, until now. When I came here they said I was family, but Mr. Anderson, you don’t put family on the street. We love what we do, and Mr. Anderson can’t take that from us.”

“Two weeks ago, my major concern about Amtrak was replacing full dining-car service with a boxed meal. An injury to one is an injury to all. What happens to them? What will happen to the rest of us? My question to the folks who are making this decision is: Do you eat a boxed lunch, or do you eat in restaurants where they are served? Why are you treating our members like this and why are you treating your guests like animals with a boxed lunch? How can you treat your guests so poorly? When business starts treating customers poorly, to me, they don’t want to be in business anymore. Are they trying to eliminate Amtrak? Today we stand with service workers, with Amtrak customers and when we fight, we will win.”

Jed Dodd, Vice President of the Brotherhood of Maintenance of Way Employees-IBT:

“Bringing you solidarity and friendly greetings from behalf of the 30,000 members of our union. We will stand with you doing anything necessary to protect these jobs. Right now, we have time for talking. But when the time for talking is done and it’s time to stop the railroad, we won’t be in front of you, we won’t be behind you, we will be beside you. We won’t go back until the job is done with results to the satisfaction of the workers and Amtrak customers.”