IAM H.E.L.P.S. stands for Honoring, Engaging, Lifting, Providing and Servicing. The initiative is a part of the territory’s continued efforts to provide essential support to residents in need. 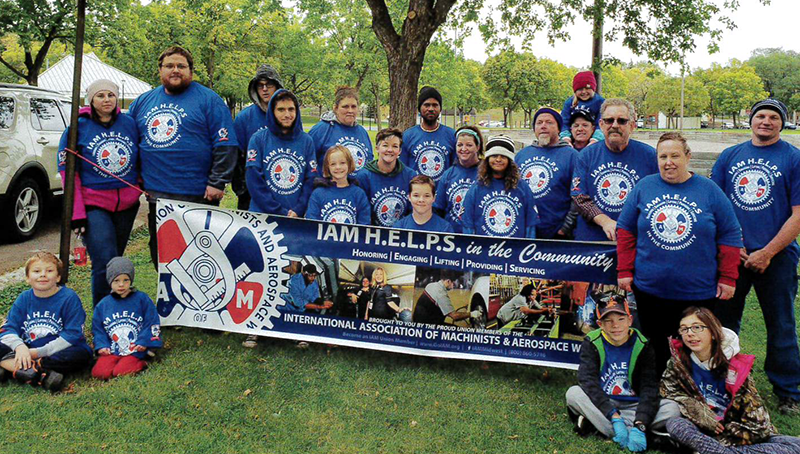 The goal of the initiative is to show neighbors what it means to be union and show members that helping people in the community goes further than the union’s role at the bargaining table or filing grievances. The Midwest Territory believes part of being a union member is service to the less fortunate and all those around us.

The program establishes a positive IAM footprint in the community, which leads to more education about unions, community organizing and workplace organizing.

Districts, tasked with hosting at least one community service event per year, have been busy helping domestic violence shelters, their neighbors in the event of a fire emergency, local immigrant communities, residents of local nursing homes — and more.

Members of IAM District 77 help restore a St. Paul, MN facility dedi cated to helping families get back on their feet.

Minnesota families inflicted with poverty, substance abuse, mental health, or domestic violence have a better place to call home, thanks to members of IAM District 77 in Vadnais Heights, MN.

Union volunteers from throughout the district recently helped restore two facilities owned by FamilyWise, a St. Paul nonprofit dedicated to helping Minnesota families get back on their feet.

“We’re giving back to the community to show folks we’re more than just a labor organization. We’re here to help people,” said IAM District 77 Directing Business Representative John Steigauf. “We need to be partners with the community. We can’t just be a standalone group that helps workers. We need to get out and help the community, as well as our workers.”

“I was helping go through the list of all the projects available and came across FamilyWise’s information,” said Olson. “A lot of their values and what they do aligns with the views we have as Machinists — taking care of families and taking care of our community. The District thought FamilyWise was the right entity to invest all of our time and efforts into.”

Executives at FamilyWise were more than appreciative of the Machinists’ help.

“I just want to take a minute to thank the Machinists and District 77 for coming out here today to help us,” said Bernell Buchanan, Associate Director of FamilyWise. “I am floored by how much work you guys are doing. We are only an hour and a few minutes in and you guys already have most of our projects done. Groups like you coming to help FamilyWise are huge for keeping our facilities safe, clean, and welcoming for our clients and our staff.”

In addition to their time and efforts, District 77 also donated a 40-inch television along with nearly a dozen different board games for the families at FamilyWise to enjoy. 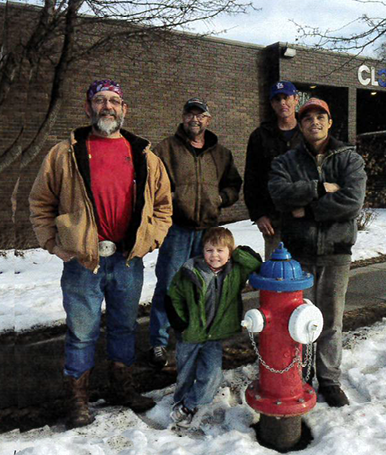 Members of IAM Local 1498 in Oskaloosa, IA are doing their part, too.

The Local, which makes fire hydrants for Clow Valve Company, “adopted” 27 fire hydrants throughout the city, as part of the IAM Midwest Territory’s “IAM H.E.L.P.S. in the Community” program.

As part of the adoption, the Local is responsible for clearing the fire hydrants of snow during the winter months.

“When firefighters are called to a fire emergency, every second counts,” said IAM District 6 Business Representative John Herrig. “They don’t have time to clear hydrants, especially in the winter months. This is our way of giving back to the community and doing what unions do best — serve. It especially helps the elderly residents who simply can’t do the work.”

To date, Local 1498 volunteers have gone out to clear fire hydrants three times, most recently this past February, when two storms pummeled the city with over two feet of snow in one week.

“We try to do things in and around what we produce,” said IAM Local 1498 member Jeff Elliott, who first pitched the idea at the Local’s monthly meeting. He, along with the help of IAM Local 1498 President Dean Scholtus and Recording Secretary Ryan Williams, helped get the program off the ground. “If we can do things that make using our product easier and help the community, we want to do that.”

Newly-arrived immigrants and refugees to St. Cloud, MN have a new place to receive training and support services thanks to members of IAM Local 623.

the basement of the training center. The sewing machines are used to train individuals on how to sew, enabling them to obtain jobs with local employers.

“Hands Across the World serves families from different countries and ethnic backgrounds who have newly arrived in Central Minnesota,” said IAM Local 623 Directing Business Representative Colleen Murphy-Cooney. “We had a wonderful time working together with the community cleaning and preparing the room for training. Hands Across the World Executive Director Brianda Cediel said she was not used to moving at the pace our group was going. One of the machines must have weighed in at about 300 pounds! Thank you to all who came out to lend a helping hand. We would not have been able to accomplish what we set out to achieve without the help of our volunteers.”

Other IAM Local 623 IAM H.E.L.P.S. events throughout the year included cleaning up a local park.

The post IAM ‘H.E.L.P.S. in the Community’ appeared first on IAMAW .